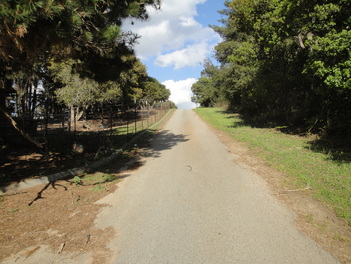 This is the driveway where the new storm water collection system has been installed.  The driveway slopes approximately 15 degrees downhill.  The water flows down the left side of the driveway next to the gutter.  This picture was taken prior to the installation and a collection of pine needle, leaf litter, and composted material has collected in the gutter for the past 10 years.  In the future it will be critical for the homeowner to keep the driveway clean so the collection device is not overloaded with debris.  The driveway collection surface is estimated at 1,500 square feet from where the collection device was placed.  This would allow for over 18,000 gallons of water to be collected during an average rainfall year. 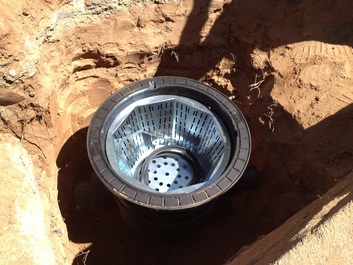 A GRAF Infiltration Filter Shaft was chosen as the collection device.  The device was placed into the excavated area for sizing and placement purposes.  The GRAF device has a cast iron grate on top with two baskets underneath to catch debris.  The first basket is made of stainless steel and catches larger material, while a second basket that is suspended under the first is made of a fine mesh to filter smaller debris.  A sedimentation basin sits below that to capture small particles.  As the basin fills the filtered water rises from the bottom and then flows out into the Schedule 40 PVC pipe.  In this case we chose 3" Schedule 40 pipe based on the flow rates from the maximum rainfall per hour data and the size of the collection area. 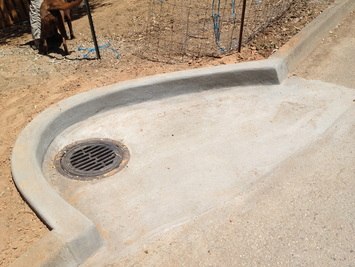 The gutter and driveway were cut in order to slope the new area to capture the water running down from above.  The gutter area has been given a first pass cleaning and the homeowner will have to maintain the area to reduce the flow of debris into the system.  The cast iron grate weighs over 50 pounds and requires a hook to pull it off.  Once it is removed the basket filters can be pulled out and cleaned and replaced in a few minutes.  The concrete was reinforced with rebar to strengthen the area and reduce the probability of future issues.

Conveyance to the Tank System 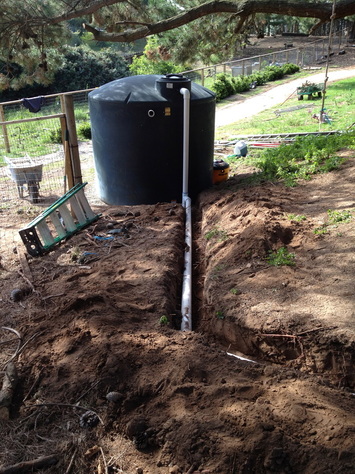 The tank system sits approximately 65 feet from the collection device.  A laser leveling device was used to make sure the inlet of the tank is lower than the GRAF outlet to offset any friction loss in the pipe.  The 3" pipe was brought out directly from the GRAF device to a 45 degree turn to the tank.  The inlet at the top of the tank was drilled out to accomodate a 3" bulkhead adapter.  The tank is a 2,600 gallon poly tank sitting on a base of pea gravel.  The tank was set up with a 2" Banjo ball valve on the other side to allow for a flexible connection to a second tank, the homeowner would like installed after seeing how fast the first one fills.  The conveyance system was placed underground and is designed as a wet to dry conveyance.  This is accomplished with the use of the bottom side of a First Flush mechanism to allow for the wet conveyance to drip dry through an emitter.  A dual filter system at the first flush mechanism was used. 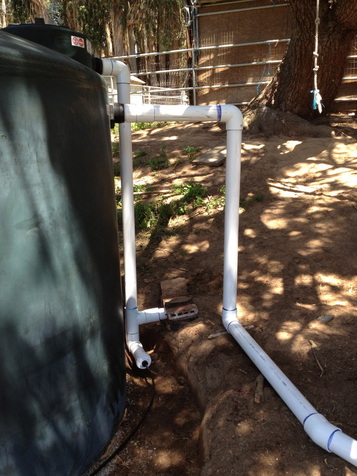 At the bottom of the inlet pipe is where the wet to dry conveyance mechanism is placed.  It drips into a poly hose that moves the water away from the tank.  The overflow moves the excess water back to the driveway downhill from the collection device.  A "skimming" overflow sits inside the tank and is set at a height to maximize capacity of the tank.  A stainless steel drain cover is fitted over the end of the overflow pipe to keep out critters.  A smaller mesh screen sits inside the drain cover to keep out insects. 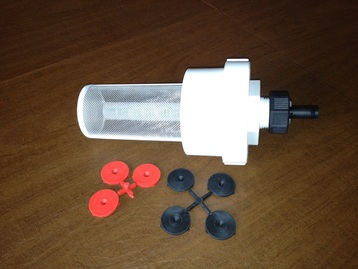 This is a picture of the First Flush mechanism with dual filters that sits at the bottom of the intake pipe.  The device uses one of eight emitters to eliminate water sitting in the wet conveyance pipe.  The homeowner will have to clean the mechanism on a regular basis to remove any excess sedimentation that flows past the GRAF collection device and settles at the bottom of the intake pipe. 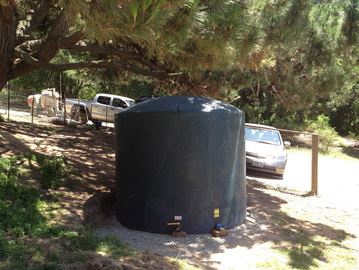 A 1" ball valve with a 3/4" reducer and hose adapter was installed to allow for gravity flow distribution of water to the garden area via garden hose.  The 1" ball valve was used to allow for the addition of a pump in the future which typically have a 1" input.  A 2" Banjo bulkhead adapter was installed to allow for a future flexible connection to a second tank with quick release levers for easy maintenance.  Bricks were placed under the ball valves to provide some support in case one of the children steps on them prior to the area being fenced in. 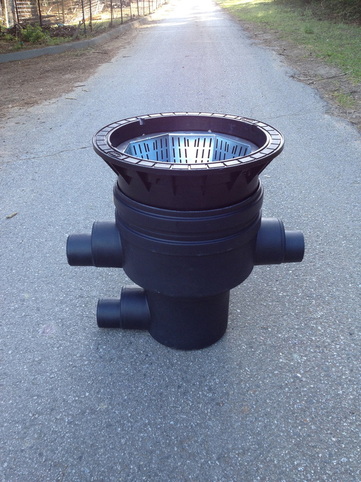 This is a picture of the GRAF device prior to being set in the ground.  The device can be used in different configurations.  In this case we only used the outlet on the right side of the device.  The device also can telescope to be set at different depths.  We cut off about 4 inches to set it at the depth desired.  A gasket is placed inside the bottom half and the top is slid in past the gasket to seal it tightly.  We also used PVC tape to seal it where the two sections meet together (after this picture was taken).

After first meeting with the homeowner, GSL spent hours searching for "storm water" catchment devices and talking with the vendors of these devices which fit this particular need.  In addition we asked questions of the Rainwater Harvesting Community through the on-line ARCSA member forums to find out more about storm water collection and the issues around the use of storm water.  Finally we discussed the desired installation with the local county Environmental Health Department to understand their concerns.  This helped us gather a wealth of information to bring back to the homeowner to make a final more-informed decision on the best way to proceed.  Overall, it was a great learning experience and the homeowner is happy having an alternative water supply.