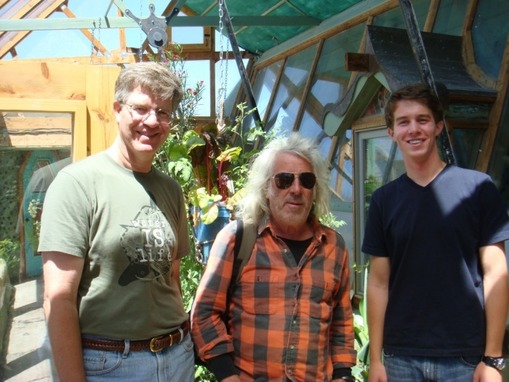 In June 2009 I traveled to Taos, New Mexico to stay in an Earthship with my son, Brian.  We stayed two nights in the "Phoenix" Earthship and met with Mike Reynolds to discuss his thoughts on Earthships, water usage, and sustainable living.  Earthships are designed to be "off the grid".  They produce their own power, water, food, and regulate temperature without heaters or air conditioners.  They are built out of garbage!  You may have seen the movie "The Garbage Warrior", starring MIke Reynolds.  The Phoenix Earthship is a 5,000 square foot home with approximately 2500 square feet of green house space for aquaculture and food production.  Photovoltaics sit on the roof and are ground mounted on the south side.  Solar thermal water heaters reside on the roof.  Rain water cisterns are buried around the back of the home and sedimentation filters clean the water for drinking and bathing.  Water is collected into the cisterns from rain falling on the roof.  Water is used 4 times before being discarded.  First it is used for drinking, washing clothes, and bathing.  Next the greywater is collected and is routed with subsurface irrigation through the green house to grow food.  The water is then collected again and used to flush toilets.  Lastly, blackwater is sent to the septic field where it is used to irrigate outdoor plants.  Consider this the next time you flush potable water down your toilet.  Are we using water efficiently today?  Remember the California Energy Commission said there will be 10 million more people in California in the coming decades and the source of water to support that population growth will predominately come from water use efficiency!  We should all have a goal to use water multiple times and not be stuck with having to use potable water for flushing our toilets. 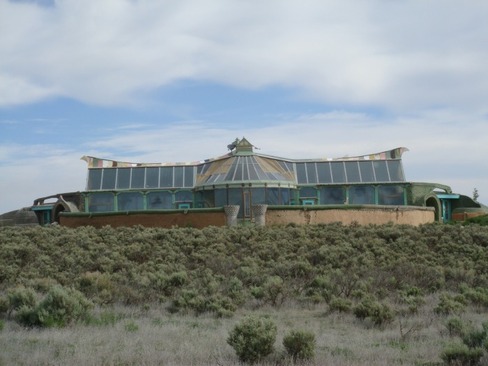 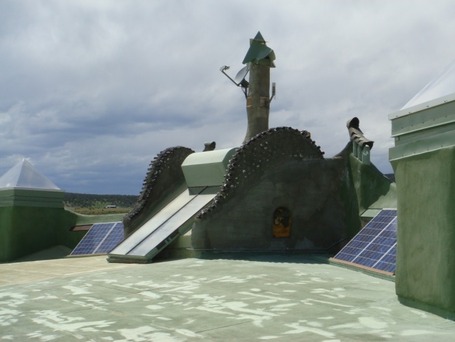 The Phoenix Earthship is a fully functional home.  As you can see in this picture the roof has photovoltaics, solar thermal, vents for internal temperature regulation, satellite TV, and plenty of catchment space to collect rainwater. 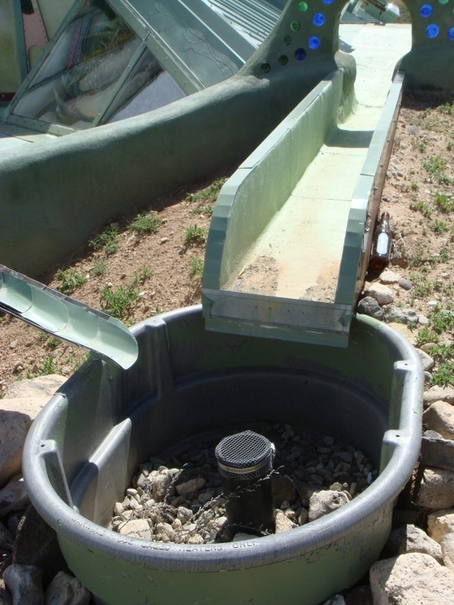 The catchment area is 5,000 square feet and gutters move the rainwater into underground cisterns.

Sedimentation filters are set up in the mechanical room to clean the water to potable and non-potable levels.  Only a small amount of water goes through all the filters to be used as drinking water.  Drinking water is only a small percentage of the total water used.  Energy and cost is not expended to make all water potable when the use doesn't demand it. 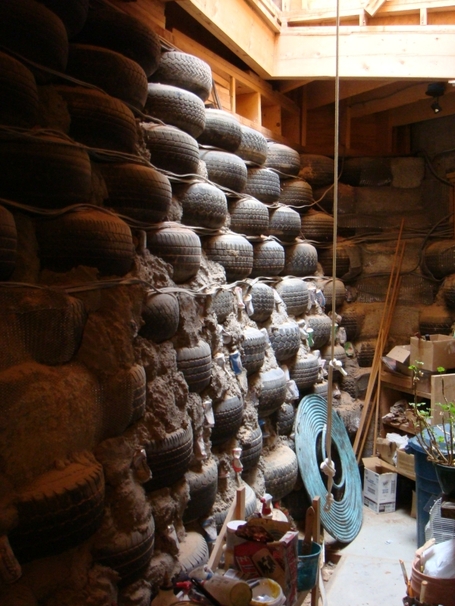 Used tires are pounded full of dirt and stacked to create a thermal mass and wall structure.  This helps regulate temperature without the use of heaters and air conditioners.  Passive solar and green house heat is absorbed by the tires and released as temperatures drop.  Counter balanced roof vents are used to move air from the greenhouse, through the living area, and out the roof.  All of this results in a relatively constant living space temperature of 70 degrees.  In June, daytime temperatures reached 90 degrees, while nighttime temperatures dropped into the fifty's.  In the winter, outside temperatures can drop as low as 35 degrees below zero, yet the banana trees and aquaculture ponds continue to thrive via passive solar gain.

Bottles and Cans are Used to Offset New Resources. 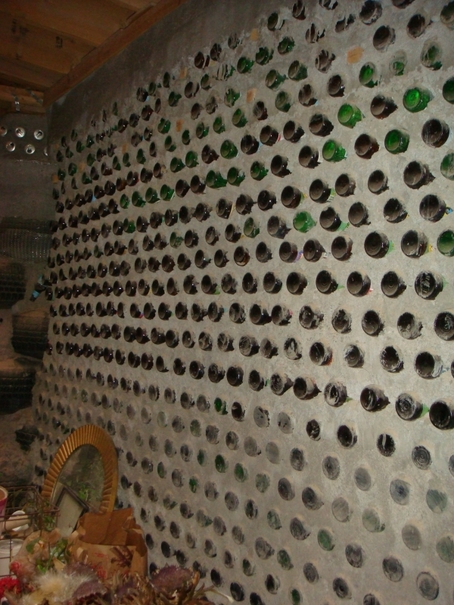 Bottles and cans, again discarded items, are used instead of new resources.  They are used decoratively as well as building materials and helped us imagine how to use our natural resources more efficiently as well as learn new ways to look at "garbage" as a usable resource with value! 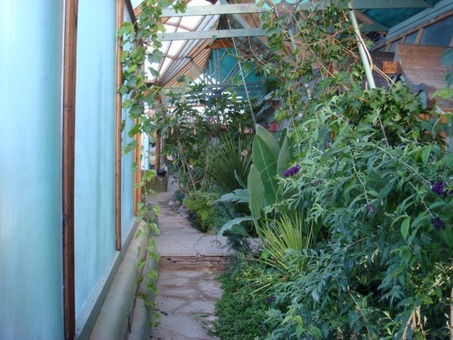 There were lots of food bearing plants as well as living things like birds, reptiles, and fish in the greenhouse.  It was truly it's own eco-system.  This picture was taken at 6am and the windows were covered with condensation from the pond and natural moisture due to sub-surface irrigation and evapotranspiration.  Even though the humidity levels outside were almost non-existent, the interior maintained a very comfortable humidity level.